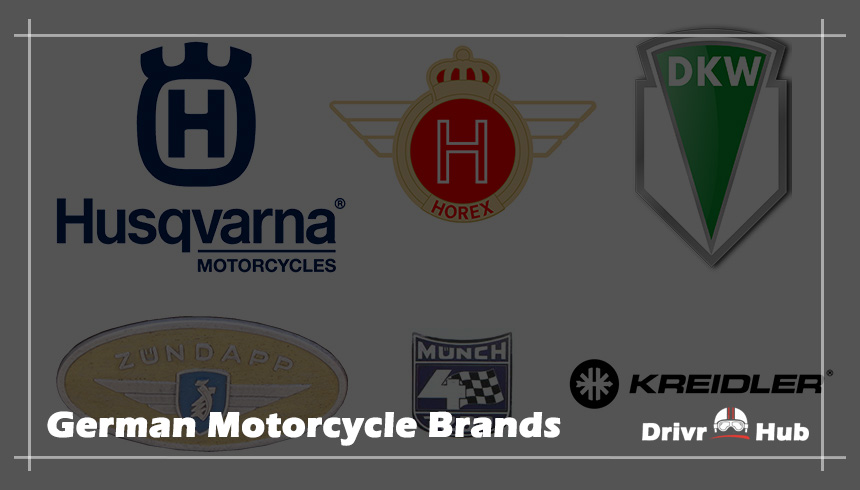 Different motorcycle brands from Germany have different specialties and designs. Below we divided the brands of German Motorcycles from World War II and modern reiteration that is taking over in the present day.

Founded in 1916, the Bayerische Motoren Werke (BMW) is one of the oldest and most renowned bikes brand made in Germany. At the same time, the famous BMW emblem was born – a circle divided into four (two blue and two white) sectors, depicting a stylized propeller against the sky. In addition, blue and white are the national Bavarian colors.

Initially, the company specialized in the creation of aircraft engines. And since at the end of the First World War, one of the conditions of the peace treaty was a ban on the production of aircraft engines, in 1918, the company was on the verge of collapse. However, the company quickly found a direction in which it decided to refocus: the production of motorcycle engines. Already in 1923, the first motorcycle, the R32, came off the assembly line of the BMW plant.

By the beginning of the 1940s, on the eve of World War II, the BMW Group was one of the fastest growing automobile companies. During WWII, BMW was known for its robust R75 model which came equipped with a sidecar and was ordered by the Wehrmacht. It was used by the German Army and was considered one of the most reliable motorcycles during wartime.

In the post-war period, it took some time for the company to revive. In 1955 the world’s first motorcycles with sprung suspension, the R 50 and R 51, were launched, ushering in a new generation of motorcycles. In 1962 BMW dealerships began to appear all over Germany. Until today, BMW is a popular car and motorcycle brand that has gained the trust of customers around the world.

Zündapp may be best known for their iconic mopeds, but before the war, they built huge two and four-stroke bikes, a notable example being the shaft-driven flat four machine. Following the war, the reconstruction of German industry saw many companies switch to producing smaller vehicles, such as scooters and motorcycles, that would be accessible to more people.

During the 1960s and 1970s, Zündapp enjoyed major success in Europe, winning first place in the 125cc class of the European motocross championship in both 1973 and 1974. Sadly though, the demand for mopeds dropped significantly during the 1980s, and this had a massive impact on Zündapp, leading them to eventually close their doors in 1984.

Fritz Kleeman was an intrepid racer that wasn’t content with the off-the-shelf machinery available, so in 1923 he founded his own: Horex. For the next 16 years, they built high-end motorcycles until World War II brought a halt to production. Then 1948 marked the start of their comeback journey, which unfortunately came to a premature end when Daimler-Benz acquired the company 10 years later in 1960. Resurgence attempts were made over the decades, one of them being Friedl Münch’s 1977 endeavour to launch a 1400cc Horex.

Then after a brief period of success, it was 1989 when Japan aided another revival, and the 644 OSCA powered by Honda Dominators hit the market. In 2010, Tonev finally acquired the rights to use this storied brand once more, and since then, have gone on to create some stunning designs. It’s been quite a journey for Horex!

While it wasn’t the most well-known manufacturer at the time, DKW rose to prominence between World War I and II to become the most successful motorcycle maker in the world. This was largely due to its founder, Jörgen Skafte Rasmussen, and his commitment to innovation such as off-road racing, front-wheel drive, and even supercharging.

After Wall Street crashed in 1932, DKW formed a vehicle conglomerate with three other companies: Audi, NSU (also a motorcycle maker), and Auto Union. After the war ended, DKW’s bike division renamed itself MZ while their two-stroke RT125 design inspired mass production of BSA Bantam models in British factories through high demand from its wartime reparation program — an impressive legacy for a company that began humbly but is now revered by motorcyclists around the world.

Münch was founded by Friedl Münch in his hometown of Munich, Germany, in 1947. The company grew quickly, and its racing successes were renowned throughout Europe during the 1950s. In the late 60s, Münch moved away from developing traditional two-strokes to focus on the four-stroke market, and it was this focus that eventually led to their success. In the 1970s, Münch released the Mammut, a 1200cc four-stroke motorcycle with an output of 97hp and a top speed of 135mph — impressive for its time!

NSU was at the forefront of motorcycle production and motor racing during the 1950s. For a brief period, it was the world’s largest motorcycle manufacturer, with an incredible 350,000 motorcycles produced in 1955 alone. NSU made high-performance machines that featured prominently in land speed record competitions on the Bonneville Salt Flats, as well as races on several GP circuits, most notably collecting five victories in both the 125 and 250 cc classes from 1953 to 1955.

While its focus on motorsport is perhaps its most recognisable legacy, its most famous model among regular drivers is likely to be the Super fox which enjoyed cult status for many generations. One particularly famous model was the Kettenkrad, a half-track motorcycle developed for the German army during World War II.

Through its long history, Kreidler has carved out an important place in motorcycle racing. Founded in 1951, Kreidler quickly rose to prominence as one of the most successful small bike manufacturers in northern Europe. This success translated to the race track when they entered the now-defunct 50cc class and captured a remarkable eight world championships between 1971 and 1983.

Despite their successes, unfortunately, the company filed for bankruptcy in 1982. Fortunately, though, Kreidler’s legacy has continued over time as E-bikes are still produced under this name – allowing many more people all over the world to experience the high-quality engineering that made them a champion on and off the track.

Kalex Engineering is a name that resonates in the annals of German motorcycle history. Although not a traditional motorbike manufacturer, they have earned their place with an unprecedented streak of 8 consecutive Moto2 world championship wins! Founded in 2008 by Klaus Hirsekorn and Alex Baumgartel, they created their first chassis for Moto2 races in 2010, which was powered by Honda CBR600RR engines.

With the new three-cylinder Triumph 765 engine introduced in 2019, their bikes are more powerful than ever before. The company has been responsible for the incredible success and has seen German rider Stefan Bradl clinch the 2011 title on one of their bikes. And from 2013 onwards, Kalex became the undoubtedly dominant force in the series – enough to win both the riders and constructors championships every year since then!

After the end of World War II, Maico started to make their own two-stroke engines, which they gradually installed in whole motorcycles. Over time, they established themselves as a fantastic off-road racing company, becoming well-known for their involvement in motocross.

In the early 1970s, despite being hampered by fewer resources compared to some of the Japanese brands, Maico riders proved successful in 125cc Grands Prix. Sadly, 1986 marked the bankruptcy of the company, and since then, vintage Marcos has become highly sought after among collectors. However, it’s still possible to get your hands on one today; a firm based in Leverkusen builds 616cc two-stroke off-road motorcycles that bear the Maico name.

Since its inception in the nineteenth century, this German manufacturer has been synonymous with making bicycles, motorcycle parts, and powertrains under its brand name. Fast-forward to the 1970s, Sachs revolutionized the country’s consumer market with an extensive line of off-road motorcycles.

After considerable success, they made their public debut in 1995 with motor bicycles, mopeds, and heavy variants of Rodster in tow. Even today, Sachs ensures that every product it releases is designed to meet the highest manufacturing standards. With products like these, it’s no wonder why Sachs continues to be a leader in the biking industry!

Since its foundation in 1689, Husqvarna has become one of the oldest and most beloved motorcycle manufacturers in the world. Starting as a metalworking enterprise, it supplied muskets to the Swedish Military. The move to motorcycles came around 1903 when they began manufacturing them – although they ceased production during WWII.

After the war had come to an end and there was a renewed demand for vehicles, Husqvarna found itself in quite a unique position; Within just one year of the conclusion of WWII, Husqvarna had already supplied over two thousand cars! Demand surged past five thousand that same year, and their production of light-weight 98cc bikes also resumed. By 1946, Husqvarna had already established itself as one of the world’s foremost motorcycle producers – a claim that only goes from strength to strength today.

The History of Motorcycle Manufacturing in Germany

Over the last century, Germany has cemented its place as a leader in motorcycle manufacturing. With its beginnings dating back to 1901, when Hildebrand & Wolfmüller was the world’s first series-produced motor vehicle, it is no surprise that German-manufactured motorcycles have made their mark on motorcycling history.

Some of the greatest international giants in motorcycle manufacturing hailing from Germany include BMW and Zündapp. Not only did these companies introduce innovative models like the BMW R32 released in 1923, which was one of the first motorcycles to sport a boxer engine, but they also laid the foundation for incredibly high factory standards with safety instruments and well-designed parts that improved riders’ handling on different terrains.

Even in war times, German motorcycles have been a force to be reckoned with. Not only did they equip their military vehicles, but they also continued innovating, as evidenced by the BMW R75, which was equipped with a sidecar and advanced features that made it an absolute icon in motorcycling history.

Motorcycles built in Germany since the early 1930s and ending in the 1940s proved quite good not only in civilian use, but also in heavy frontline battles. Also German motorcycles with sidecar were the most common equipment for the German army, when the BVM bikes with side trailers were used by the Nazis to travel around the captured territories in 1941-1944.

Zundapp motorcycles (KS600, KS750) were also actively involved in the war effort. The KS750 became one of the most tractive members of the Wehrmacht motorcycle forces. The all-terrain model was able to cross shallow water obstacles with full engine immersion. But the submergence had to be short so the motorcycle would not be swamped.

The postwar period was characterized by stagnation and devastation, as many of the factories that built motorcycles were destroyed. Only by the end of the 50s, companies began to revive and gradually build new models of motorcycles.

Contemporary German bike brands such as some of the brands described done their part to keep the country’s motorcycling history alive. Most of these manufacturers offer models that are heavy on performance, technological innovation, and modern styling. Today, the country continues to bring forth incredible brands like Husqvarna, Sachs and Kalex to the world of motorcycling. With its solid reputation for quality engineering and high-performance engines, it’s no wonder that German motorcycle companies are some of the most sought-after in the industry!

With the long and strong tradition of motorcycle manufacturing in Germany, it is no surprise that the country’s motorcycle companies are among some of the most revered and respected in the industry. From classic brands like BMW and Husqvarna to modern powerhouses like Kalex and Sachs, German motorcycles stand out from the crowd with their impeccable engineering and well-designed parts.

Whether you’re in the market for a high-performance bike, an off-road model or just a reliable everyday ride, it’s always worth considering Germany’s motorcycle brands. You can be sure that with German-made models, you’ll be getting some of the best motorcycles around!