The naked motorcycle is a road bike without a front fairing or windshield, with a minimum of plastic cladding and a frame and power plant exposed. The first examples of Naked were handmade from sportbikes after an accident by removing the damaged plastic. How else do naked motorcycles differ from classical motorcycles and what models are popular now - we will tell in the article. What is a naked motorcycle?

Naked motorcycles are designed exclusively for urban riding. They have a small wheelbase, which makes them comfortable for short distances and easier to maneuver. Statistics show that motorcycles that have a small wheelbase are the most maneuverable in the city. Among the most popular models belonging to this segment are the Ducati Monster 400cc, the KTM Duke 200cc, and the Yamaha MT-07.

The appearance of these bikes is appealing and different from classic sports bikes. It feels like it just wasn't fully assembled at the factory or there weren't enough plastic elements, but that's what this category is all about. So, what is the main difference between Naked bikes and sports bikes? These bikes have a straighter landing, which can be seen in the pictures.

In addition, they are characterized by poor aerodynamics about the sports bike. This can be explained by the lack of plastic and windshield. On a sportbike, the driver and the motorcycle are one unit. If we consider riding a naked bike, such an effect cannot be felt. The steering wheel on such motorcycles is made so that the driver's back is almost straight. This is necessary for full control of the situation on the road.

The weight of the motorcycle is very important for moving around the town. It is for this reason that Naked is made quite light. If we give an average statistic, their weight is only 160-200 kg. As for fit, such motorcycles are suitable for almost any height. But there is one nuance - too high people will be uncomfortable to maneuver in the city, as the steering wheel will rest in the knee. Besides, a tall person does not look aesthetically beautiful in such a position.

In landing naked motorcycle has another significant disadvantage. These motorcycles are designed only for travel in town. If you use them for a long distance, will quickly get tired back and arms. This is because the landing here involves a slight slope of the back. The rider's footrests are positioned the same way as on sports bikes.

A little history of the Naked Motorcycle

Who was the first? There is an opinion that it was the iconic Ducati Monster. The Italian bully appeared in the early nineties and was a cocktail of the Ducati 851 sportbike frame, a fork from the 750 SuperSport sport tourer, and an air-cooled L-twin engine (V-twin with 90-degree cylinder camber) with the trademark desmodromic valve drive from the 900 SuperSport. The use of off-the-shelf solutions kept the cost of the bike at an acceptable level. 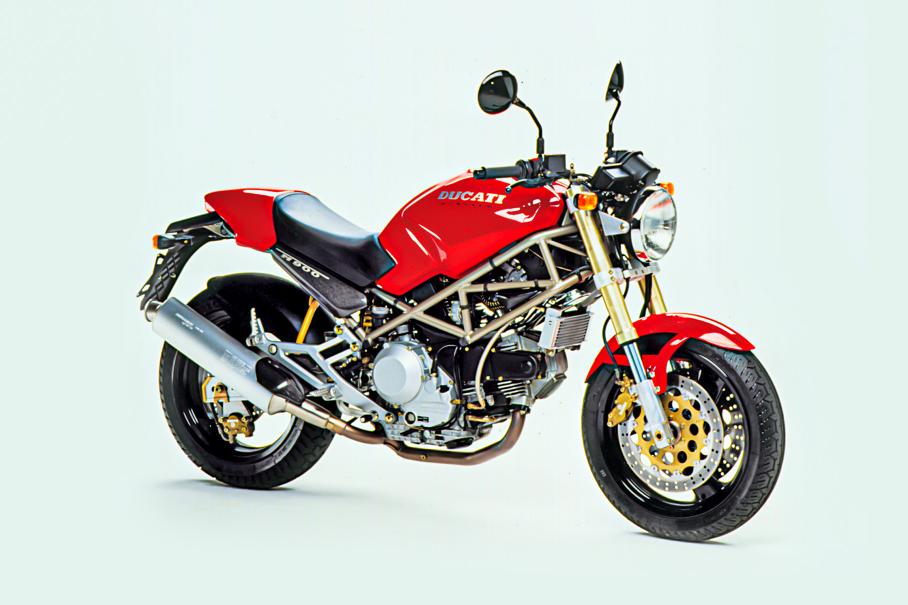 Almost at once sounded the return salvo from the UK - the brand "Triumph" brought the Speed Triple model to market. One of its evolutions you could see in the second part of the blockbuster "Mission Impossible". It was on it Cruz-Hunt did spectacular stunts.

Legend has it that one of the employees of Triple broke the Daytona 900 sportbike and suddenly realized that you can have fun riding without a fairing. The charismatic, brutal naked made a particularly strong impression in black and lured young riders to the dark side with its dark aesthetic coupled with the 885cc, 99hp liquid-cooled triple.

New naked motorcycles continued to appear in the nineties, but the turning point, or at least a significant milestone, was the birth of the crazy Aprilia Tuono RSV in 2002. How else could it be, because it's an Aprilia! Its engineers know more about healthy insanity and rideability than many of its colleagues. The Italian car preached an uncompromising attitude and was a hundred percent street-fighter in the strictest definition of the term.

It was based on sportbike RSV Mille with 998 cc Austrian V-twin BRP-Rotax rated at 125 hp. The Tuono had no fairing, was equipped with a conventional handlebar rather than clips and a standard steering damper in case of wobbling due to the specific weight distribution.

A Naked bike is a motorcycle that differs from a sportbike in its lack of plastic, deteriorated aerodynamics, and limited environment. Such bikes can only be used in urban environments. Naked bike class can include a lightweight 150cc motorcycle and a powerful bike with a 400cc engine cubic capacity.