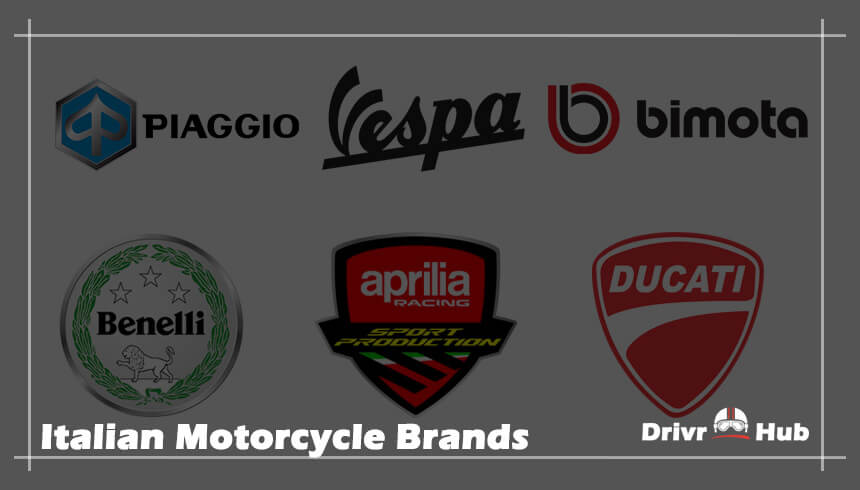 When it comes to motorcycles, the Italians know a thing or two. With a rich history of motorcycle manufacturing and some of the best brands in the business, Italy is a force to be reckoned with. In this article, we take a look at all the best Italian motorcycle brands as well as their classic counterparts. We’ll discuss what makes each one so special. So if you’re looking for something new or want to get to know the classics, there’s something for everyone in Italian motorcycles!

Aprilia is an Italian motorcycle company, one of the brands owned by Piaggio. Having started as a scooter manufacturer in Noale, Italy in 1968, Aprilia entered the motorcycle industry in 1975. The first production motorcycle from Aprilia was the Scarabeo 100cc road bike. In the 1980s, Aprilia added enduro and motocross bikes to its range.

From this period onwards they began competing in Grand Prix racing in both the 125cc and 250cc classes. In 1984 Aprilia launched the TL320 trials bike which was ridden by several world champions such as Gerardo Mannino and Giacomo Agostini. In the 1990s, Aprilia won several 125 and 250cc championships including the MotoGP world championship in 2010 with riders Jorge Lorenzo and Marco Simoncelli.

In the 2000s, Aprilia added supermoto, scooters, and lightweight motorcycles to its range. The company has a strong racing heritage and has been very successful in various disciplines of motorcycle racing. In recent years, Aprilia has also become a major player in the motocross and enduro market segments.

The brand is currently headed by CEO Roberto Colaninno.

The Piaggio Group is an Italian multinational company based in Pontedera, Italy. The group’s main products are scooters, mopeds, motorcycles, and all-terrain vehicles (ATVs). The history of the Piaggio Group began in 1884 when Rinaldo Piaggio founded the company as a manufacturer of locomotives and carriages for railways. In 1916, the company started producing aircraft engines, which led to the establishment of the Piaggio Aero in Genoa in 1923. The company then diversified into other areas such as shipbuilding, agriculture, and electronics.

In the 1950s, the company became known for its Vespa scooter, which was first introduced in 1946. The Vespa went on to become one of the best-selling scooters of all time with over 18 million units sold.

In recent years, the Piaggio Group has been focused on sustainable mobility solutions and new technologies for two-wheelers. In 2015, the group launched its first electric scooter, the Elettrica, which was followed by the launch of the hybrid Vespa Elettrica in 2018. The group is also working on developing hydrogen fuel cell technology for two-wheelers.

Vespa is an Italian brand of scooters produced by Piaggio. Founded in 1946, Vespa has become one of the most popular brands in the world. Vespa scooters are known for their unique style and easy-to-drive design. From the beginning, Vespa scooters were known for their one-piece painted stamped steel body, a flat floorboard (providing protection for the legs), and a protruding front fairing.

The company now offers a wide variety of models to meet every cyclist’s needs. One of the most popular Vespa models is the LX150. This scooter is ideal for those looking for an easy way to get around town. It is equipped with a 150cc engine with 12 horsepower. It also has a low seat height and low weight, making it easy to handle.

Benelli is an Italian brand of motorcycles, scooters, and firearms. It was established in 1911 in Pesaro, Italy by the six Benelli brothers. The company first began as a manufacturer of bicycles and components before moving on to produce small motorcycles in the 1920s.

During World War II, Benelli produced weapons for the Italian military. After the war, they resumed the production of motorcycles and went on to become one of Italy’s leading motorcycle manufacturers. Today, Benelli remains a family-owned business and produces a range of motorcycles, scooters, and firearms. The Benelli brand is best known for its high-performance motorcycles.

The company has a long history of racing success, both on track and off-road. In recent years, Benelli has expanded its product range to include entry-level and mid-range motorcycles, as well as scooters and a line of firearms. Benelli is currently owned by the Chinese company Qianjiang.

Ducati is an Italian motorcycle manufacturer, founded in 1926 by brothers Adriano and Marcello Ducati in Bologna. The company produces sports motorcycles. Both brothers were interested in radio, so initially, Ducati built electronic products, including some 4-1/2 and 6V rectifiers, which they sold to Radio Brevetti Ducati.

In 1946 they opened a factory in Via Cavalieri Ducati 11, where they made radios and other electronic equipment. In the 1950s, the company started producing motorcycles with engines ranging from 125cc to 350cc. In the 1960s, Ducati entered the US market with their Mach 1 racing motorcycle. In 1971, they introduced the 750cc superbike which won the Imola 200 race. Ducati’s most successful period was in the early 1990s when they introduced the 851 and 916cc V-twin engines.

Moto Guzzi is an Italian motorcycle manufacturer and the oldest European manufacturer in continuous motorcycle production. Since 1921, Moto Guzzi has been a part of the Piaggio Group. The company was founded in 1921 by two friends, Carlo Guzzi and Giorgio Parodi, who were both passionate about motorcycles.

They started the company with just a handful of tools and a small workshop in Genoa, Italy. The first Moto Guzzi motorbike was the “Normale”, which was based on a British bike called the Douglas. The Normale had a 498cc engine and was able to reach speeds of up to 60km/h (37mph).In 1923, Moto Guzzi released the “GT”, which was a more powerful version of the Normale with a 592cc engine.

MV Agusta is an Italian motorcycle manufacturer founded in 1945 near Milan in Cascina Costa, Italy. The company started as an offshoot of the Agusta aviation company founded by Count Giovanni Agusta in 1923. The Count died in 1927, leaving the company in the hands of his wife and sons, Domenico, Vincenzo, Mario, and Corrado. The acronym MV stands for Meccanica (mechanics) Verghera, the hamlet where the first MVs were made. The company manufactured small-displacement, cafÃ© racer-style motorcycles through 1957 and produced their first real road-going motorcycle in 1958. In 1961, MV Agusta debuted with the small-displacement 125cc GT, followed by larger capacity bikes ranging from 200 to 600cc.

In those early years, the company focused on race machines and won numerous Grand Prix racing victories. John Surtees, Phil Read, and Giacomo Agostini were just a few of their famous riders who racked up an impressive number of wins on MV Agusta motorcycles. In fact, MV Agusta dominated Grand Prix racing for nearly a decade, winning 17 consecutive 350cc and 500cc world championships between 1958 and 1974. The company pulled out of Grand Prix racing after 1976 due to financial difficulties but made a brief return in 1987 with rider Jorge MartÃ­nez taking one final world championship title before the company once again withdrew from racing.

MV Agusta’s production has always been rather exclusive and in low volumes. The company’s primary market has always been Europe, but they have also exported motorcycles to the United States, Canada, Australia, and Japan. Today, MV Agusta produces a range of high-performance motorcycles in the supersport, naked, and faired categories. All of their bikes are powered by four-cylinder engines ranging from 800cc to 1,000cc.

Bimota is an Italian motorcycle manufacturer founded in 1973 by Valerio Bianchi, Giuseppe Morri, and Massimo Tamburini. The company name is a portmanteau derived from the first two letters of each of the three founders’ surnames.

Bimota first made its name in the late 1970s with its innovative and distinctive designs, many of which used the then-new technology of large diameter disc brakes. In the 1980s, Bimota added other production motorcycles to its range including the Suzuki GSX-R1100-powered SB8K “Superbike” and Honda VFR750R-powered RB8 “Racing Bikes”. In recent years, Bimota has concentrated on custom and limited production motorcycles using engines supplied by other manufacturers.

Garelli Motorcycles is an Italian brand of motorcycles, mopeds, and scooters. It was founded in 1919 by Adalberto Garelli in Milan.

Cagiva is an Italian motorcycle manufacturer founded in 1978. The name Cagiva comes from the first two letters of the founders’ surnames, Giovanni and Claudio Castiglioni. The company manufactured motorcycles for road racing and off-road racing. In recent years, however, they have mostly produced street bikes. The company was sold to Harley-Davidson in 2008 but was resold to Italy’s MV Agusta in 2015.

Cagiva also had a successful time in the World Superbike Championship, winning the title in 1987 and 1988 with Raymond Roche, and again in 1995 and 1996 with Carl Fogarty. The company has also won the Dakar Rally five times, most recently in 1998 with Giacomo Agostini. Cagiva currently produces several models of motorcycles, including the Raptor 650, the Rivale 800, and the Mozilla 1000.

SWM was an Italian motorcycle manufacturer founded in 1971 by Piero Sironi and Fausto Vergani. The company originally produced off-road motorcycles, but later expanded into producing street-legal motorcycles as well. SWM was acquired by AMF-Harley Davidson in 1974 and ceased operations in 1984.

The Italian brand Vyrus was founded by motorcycle enthusiast and engineer Ascanio Rodorigo in 2002. The company is based in Vicenza, Italy.

Vyrus produces high-end, custom motorcycles with unique design elements. The company has a small team of engineers and craftsmen who create each motorcycle by hand.

Vyrus has a reputation for building quality motorcycles that are both stylish and perform well. The company’s bikes have been featured in magazines such as “Superbike” and “Motorcyclist.”

In addition to its line of motorcycles, Vyrus also manufactures a line of performance parts and accessories. These products are designed to improve the performance of Vyrus motorcycles.

There are many other great Italian motorcycle brands out there, but these are just a few of the best and most popular. Each of these companies has a long history of success and innovation in the motorcycle industry. If you’re looking for a quality motorcycle, you can’t go wrong with an Italian brand. Thanks for reading! Ride safe!