Many of you may no longer have any questions about how to ride a bicycle with gears, but don’t forget about beginner riders, for whom this issue remains very relevant.

Improper gear shifting sooner or later leads to an open circuit or even breakdown of the switches. And if you are on a long trip, such a breakdown will definitely take you by surprise. Correct gear shifting is the key not only to the health of the bicycle but also to the most productive ride in any terrain.

So, we will briefly consider a bicycle transmission device. 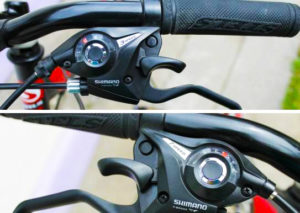 A modern bike has 2-3 stars in the front (system) and 5-10 stars in the back (cassette). Gear shifting is carried out using the rear and front switches that work with the chain, transferring it to the stars of the connecting rod system and to small stars on the rear wheel hub, which causes a change in speed. The gearshift levers (shifters) can be in the form of levers and grip shift – a rotary gearshift mechanism on the steering wheel handle.

Note! The presence of a large number of gears in a bicycle does not indicate its high-speed capabilities. More gears simply means more range for adjusting the appropriate speed and more efficiency in driving.

How to switch speeds

The gears are needed so that it is possible to pedal faster and easier and to control the bike. The lower the speed, the less effort must be applied to rotate the pedals.

Switching to a higher speed, pedaling will be more difficult but every such push of the pedal will make your bike move farther and faster.

Low (or light) gears are convenient to use when climbing uphill or in front of hills (when you need to apply more power to pedaling), most often used during descents to accelerate even more

If you drive on flat terrain, then you may not need speed at all. And if you have them, switch to the big one when you feel that pedaling is too easy, as it’s time to change gears. Do so gradually, if you intend to gain more speed.

In front of a hill – get ready and drop your gear a little down to make pedaling easier. It will take time to get used to, but it will greatly facilitate your climb to the hill by bicycle.

If you only need to switch the speed slightly, use the right switch. It is designed for small speed changes. If you need a sharper and more significant change in speed, it is better to use the left switch.

Before braking, we recommend that you reset the speed mode a bit so that when you start driving again, it will be easier to start moving (at high speed, you will need to put too much effort into moving the bike).

Also, follow a few simple rules when riding a bike with gears so that it lasts as long as possible.

Rule number 1. Any switching of speeds should occur in motion but at the so-called idle speed. That is, you need to accelerate the bike to the point where it can ride by inertia, so that torsion occurs without transmitting torque to the rear wheel, and then switch the speed. That’s why they do not recommend switching speeds when you go uphill (you can’t switch speeds freely. If you try, you will most likely stop). With the application of force during gear shifting, unpleasant sounds appear that indicate that the chain hardly jumps from one star to another, which can negatively affect its performance.

If you are thinking about how to ride a bicycle with gears in traffic, then you can do as follows; when you are forced to stop, stop, raise the rear wheel, pedal, change gears and, if necessary, repeat this process.

Rule number 2. Do not skew the chain.

You need to select speeds not only based on the terrain on which you drive but also on the location of the chain. Do not allow the chain to be located on the opposite extreme gears. For example, on the first front gear and the last rear. This break the chain.

This is the simplest and rarely executed rule that gives you more precise knowledge about your bike and its usage. There are a huge number of nuances you need to know that you will be able to find in the instructions.